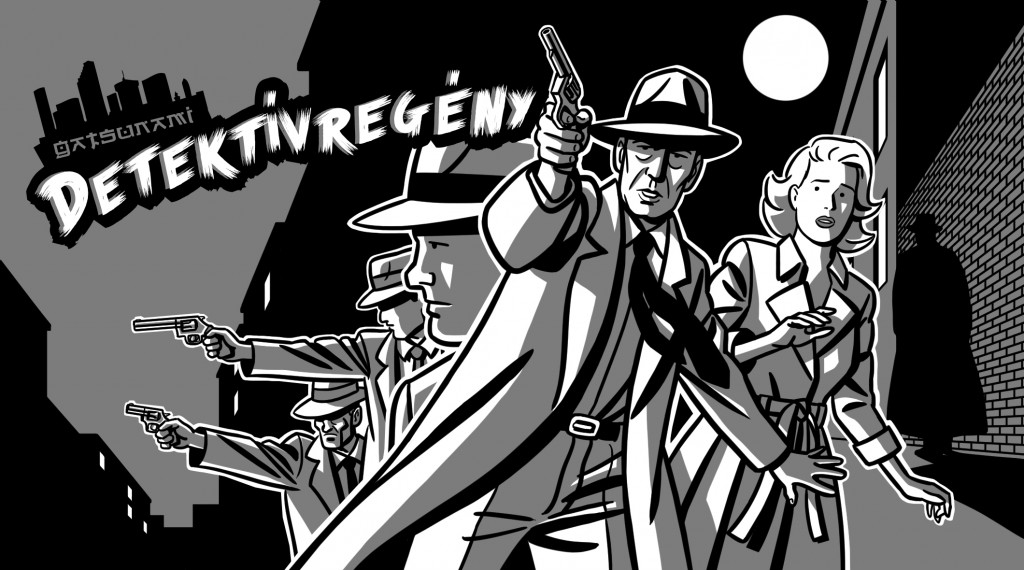 In this post I am going to explain how the Detektívregény (Detective novel) video clip has been made from my point of view, the drawer. Tamás had already shown how to make illustrations in general and not surprisingly what I want to speak about is quite the same process. As a matter of fact, there are 52 separated illustrations placed one after the other which tell a whole story in such a way like in comics.The main difference between the two is while the drawings in the comics can be simpler a bit, in this process each illustration has had to be perfect that is to say it was not worth saving time on either the elaboration of the backgrounds or the characters because it would have resulted in the lack of the feeling among the pictures’ continuity so we have been aspired to reach a film like sense.

The work process was similar to making the process of comics. Tamás wrote a short sketch of the events (synopsis) first, then he divided it into scenes according to the pace and length of the song. It was actually the screenplay itself which included the description of each frame. On the basis of this I did short drafts in order to see how each drawing would look like. Then I sent them to be checked and I waited for Tamás’s suggestions and approval. 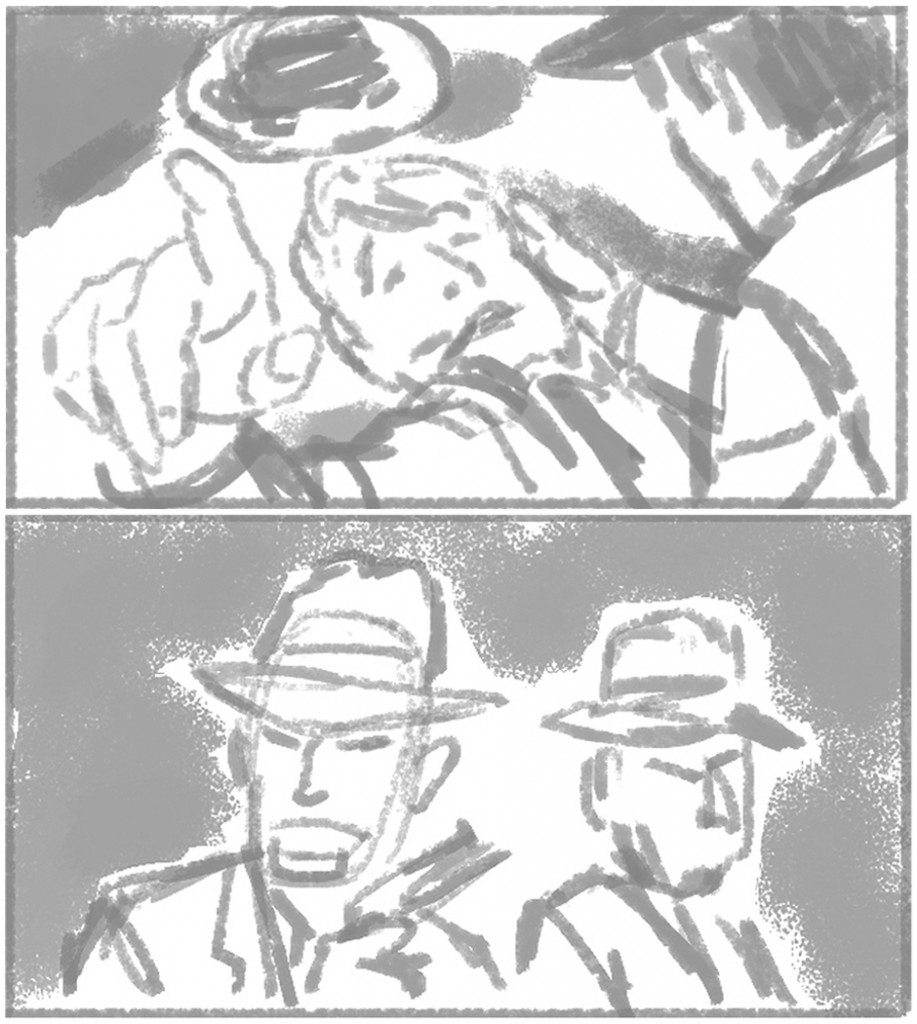 Only after this I could start the more elaborated and clear-out line sketch, which made my work easier before having contouring – so it was not necessary to talk it over. This kind of draft show more similarities with the final drawing. Although slightly changes may happen after this stage as well, for example the bad guy’s wicked smile on the second sketch has been changed to a gruff gesture so as to highlight that the two guys are not evils at all, but they simply do their jobs. A tiny change can also be noticed on the face of the main character’s friend: I found his facial expression too lively on the sketch comparing to the fact that he just had been pitched out of the window of a block of flats. Well I would have liked to show for the viewer that he is at death’s door so without this alteration it wouldn’t have been obvious why he is left alone by the main character in the next picture. 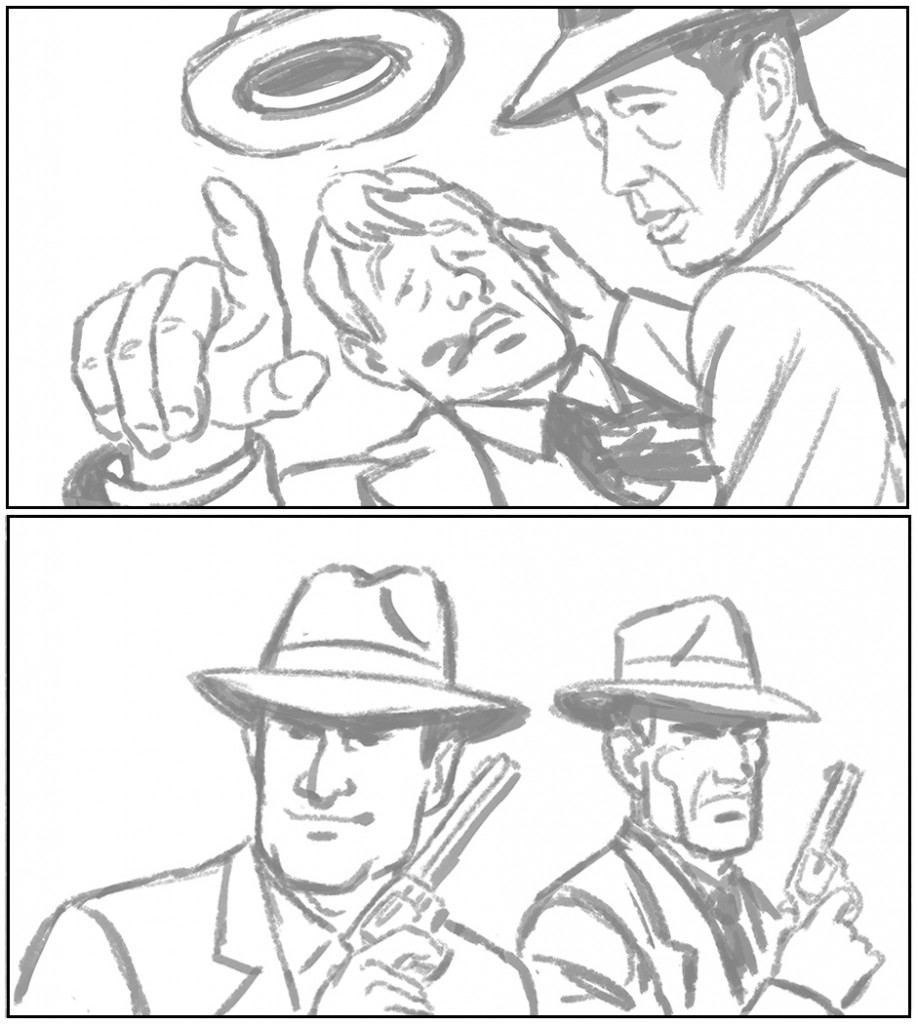 The next step is inking, which means clarifying the draft, finalizing the lines and filling the black spaces. At this point, the drawing becomes fixed, it is done structurally, and to tell the truth it is equal to its final form more or less. 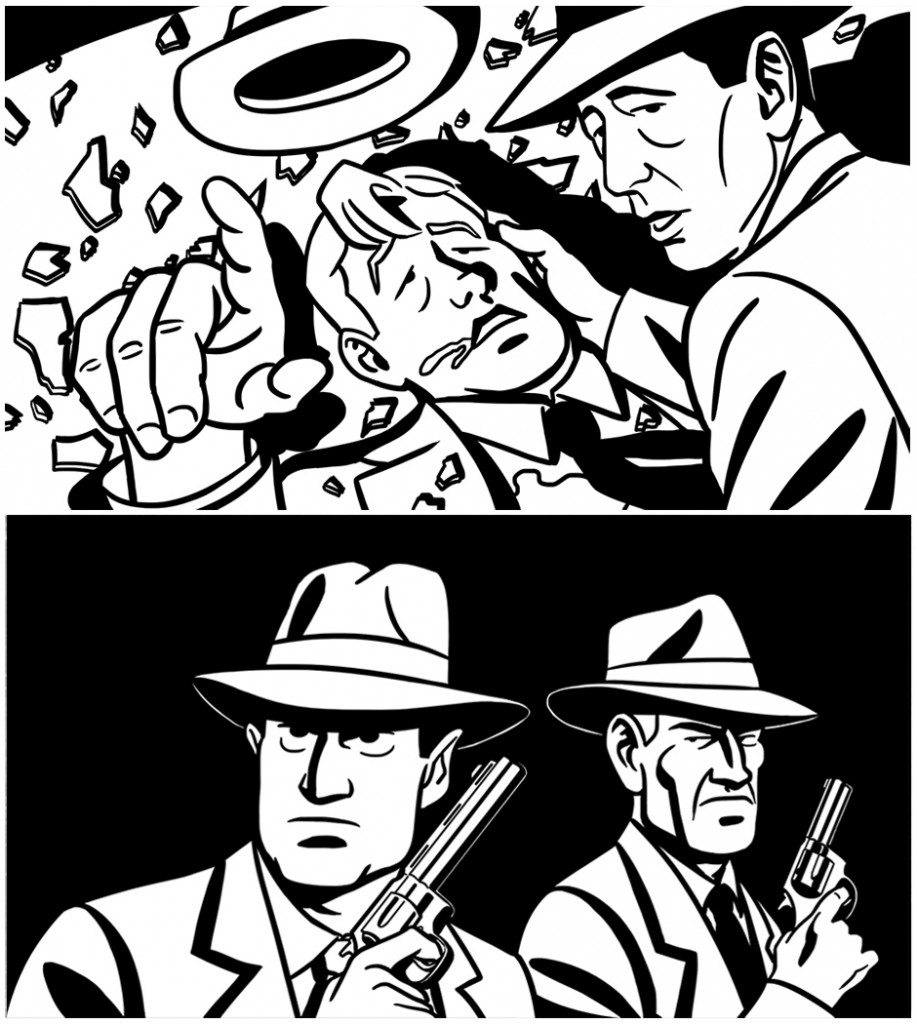 The final step is the grayscale colouring, which places things and figures into space, sets out the light and faded areas, so it makes the drawing livelier. In the meantime it hopefully evokes the feeling of the old black and white noir and gangster movies, and last but not least it gives a unified style to the clip. 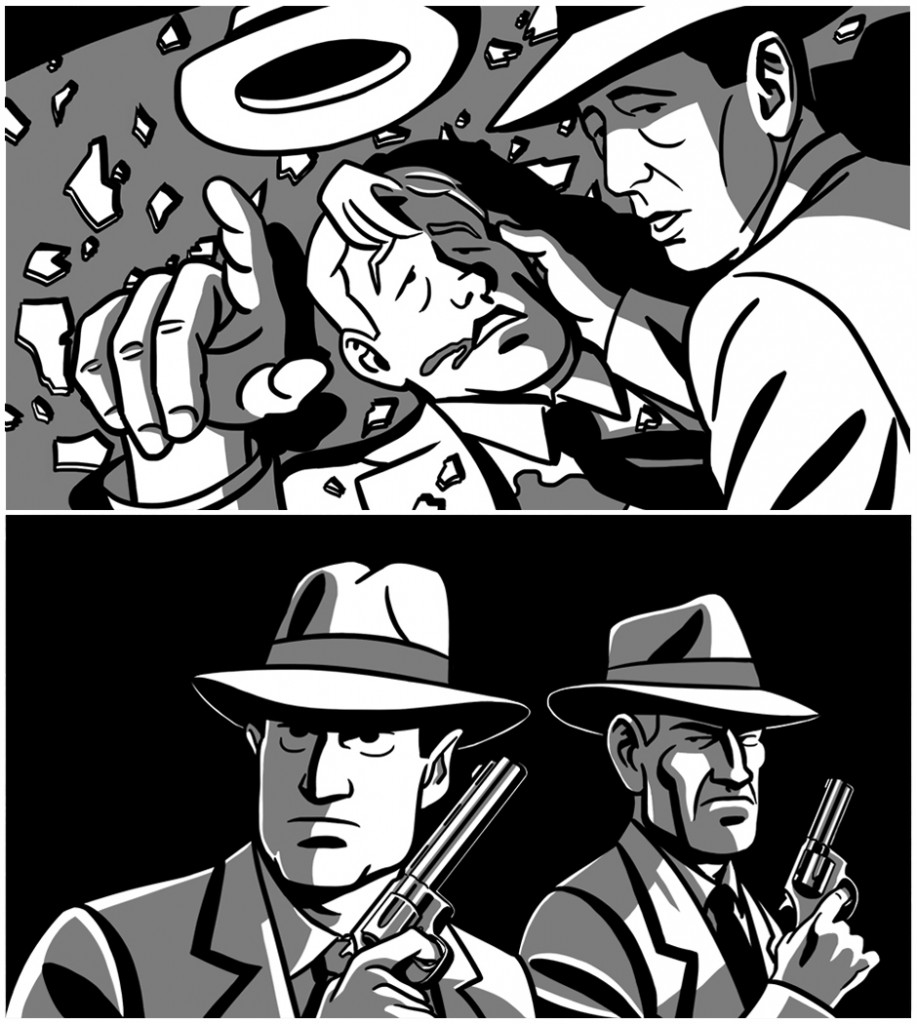 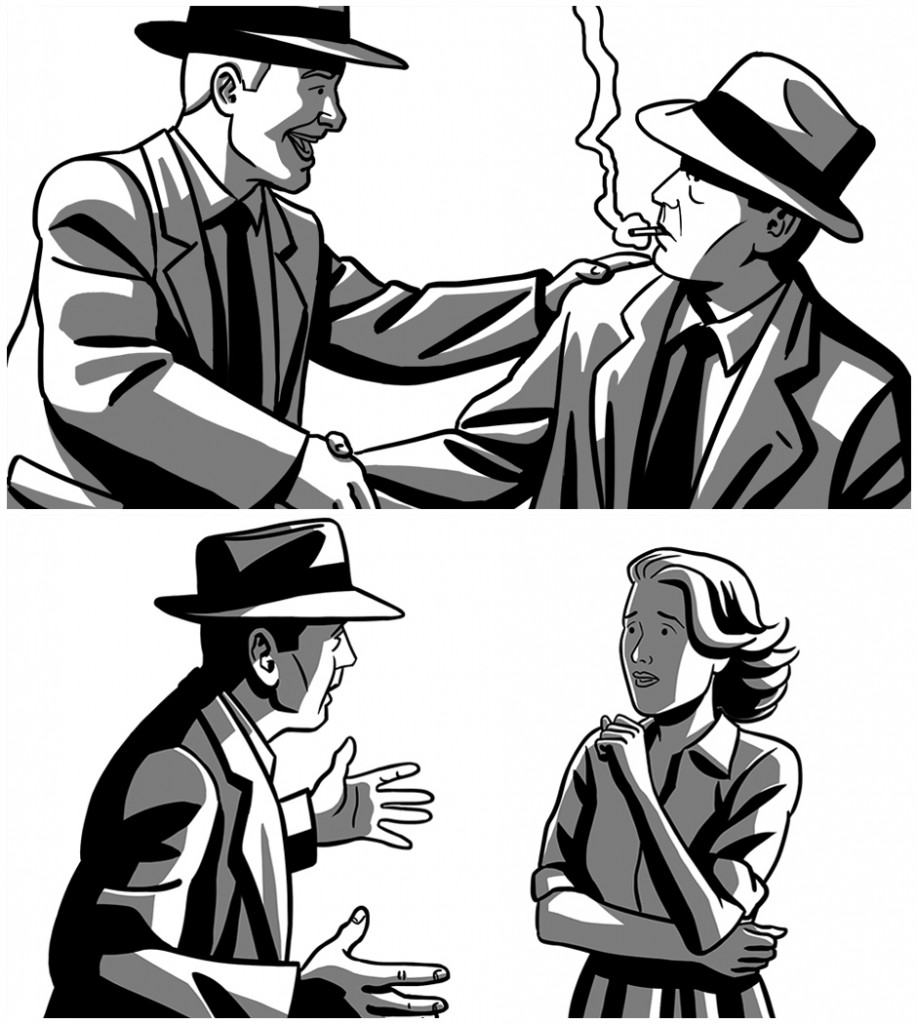 The only thing in which the process differs from the traditional way of making illustrations is the fact that all drawings had to be divided into backgrounds and foregrounds in order to create motions for the clip. This required a plus task in such a way that we had to draw those other parts of the backgrounds which otherwise would be covered by the foregrounds’ characters or objects. Therefore both illustrations consist of two superposed layers, which Tamás could slip as many times as he wanted during the animation process. The most challenging and creative part of the work was for me to make clear drawings for the sake of proper understanding in the whole story while I had to be careful of the contrasts of the background and the foreground at the same time, which could only allow certain variations of compositions and other image possibilities. 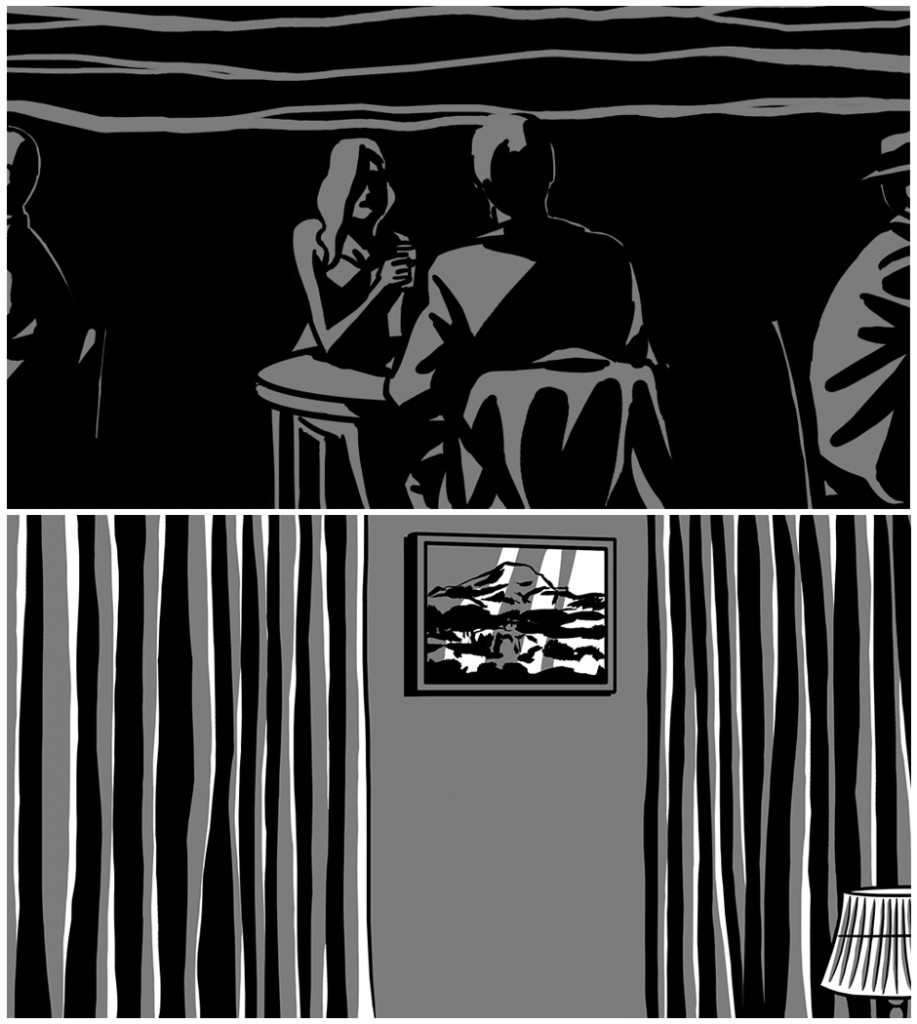 My task with making the illustrations has already come to an end and it was Tamás’s turn to breathe life into the sequence of pictures and combine it with the song. An old photo filter, which called for the quality of old copies was also added to the drawings during the post-production and I would be more than happy to tell that his work completely ruined my entire work, but it would be a lie… because I feel that the entire project has become more exciting, more sophisticated and less “sterile” . 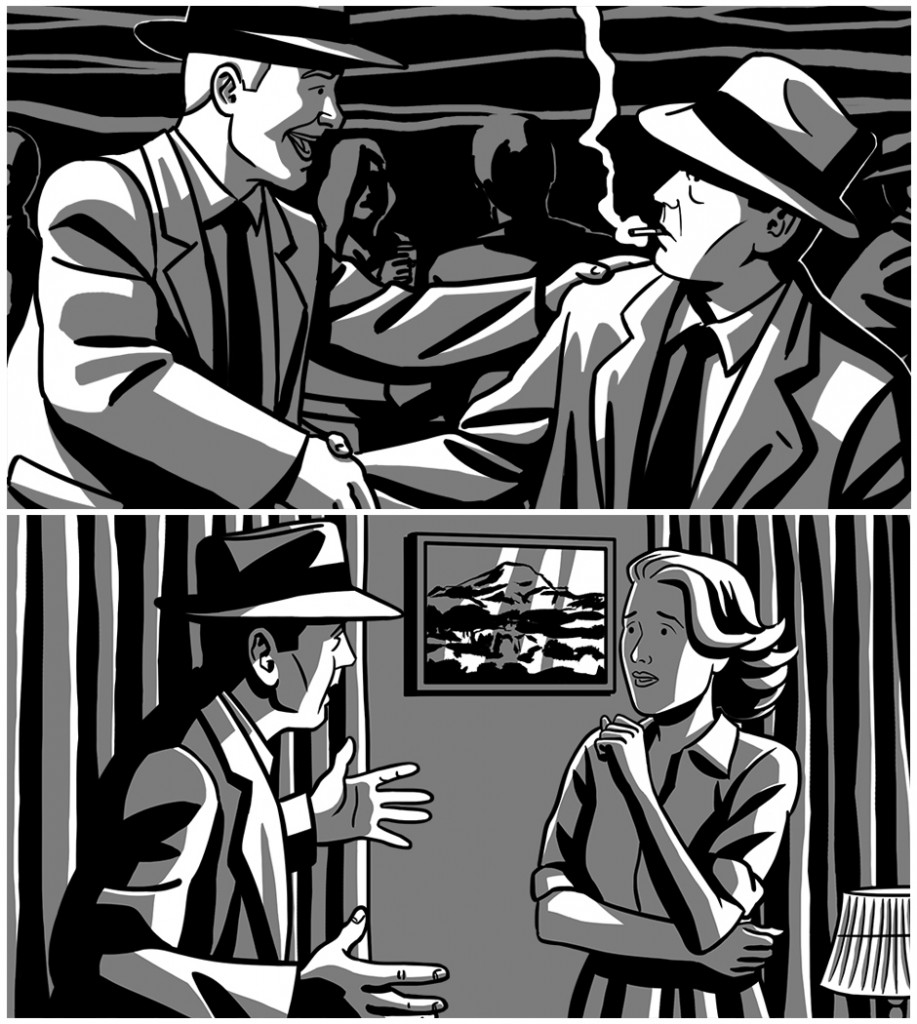 The outcome can be seen here:
Detektívregény